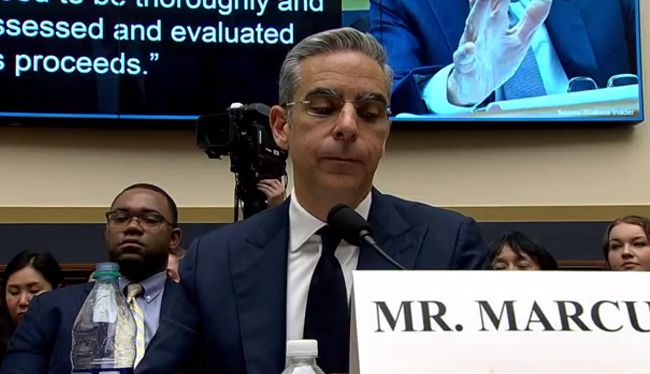 The hearing mostly centered on trust issues, particularly as the social media giant has been found violating user privacy in the past. Most recently, the company was in the headlines for a whopping $5 billion fine to be imposed by the Federal Trade Commission (FTC).

Marcus, for his part, continued to emphasize his commitment to “do it [Libra] right” and not launch the project until all regulatory concerns are fully addressed.

Lawmakers, however, sought responses from Marcus on more specific issues such as if Libra is exchange-traded fund (ETF), whether they would agree to do a pilot program before launching, would Libra be discriminatory in nature, and much more.

“Ultimately, if Facebook’s plans come to fruition, the company and its partners will yield immense economic power that could destabilize currencies and government. Facebook’s proposed entry into financial services is all the more troubling because it has already harmed a vast number of people on a scale similar to Wells Fargo and demonstrated a pattern of failure to keep consumer data private on a scale similar to Equifax.”

The policymakers had recently called for a moratorium on the cryptocurrency project. Waters took this opportunity to put up the same question to Marcus saying:

“Will you stop dancing around this question and commit here in this committee … to a moratorium until Congress enacts an appropriate legal framework to ensure that Libra and Calibra do what you claim it is intended to do?”

“I agree with you that this needs to be analyzed and understood and the proper oversight needs to be set up before it can be launched … and this is my commitment to you, we will take the time to get this right.”

Rep. Carolyn Maloney also asked the same question that would Facebook agree to a moratorium. When Marcus tried to respond with a similar answer as before, Maloney cut him in between and said, “I take that as a no.”

Is Libra a Security, Commodity, or ETF?

Rep. Patrick McHenry asked him a direct question, “Is [Libra] a security?” Marcus responded saying, “We don’t believe it is.” McHenry then asked, “Is it a commodity?” to which Marcus answered, “Based on the current U.S. law, I believe it might be a commodity but we see it as a payment tool.”

McHenry further queried, “Is it an exchange-traded fund (ETF)?” to which Marcus said, “It is not.”

McHenry said, “If Libra is ‘none of the above’ in the current regulatory structure…how do you comply it with regulations?”

Marcus answered, “The way we comply with regulations is in a number of ways. First, as far as the Calibra wallet is concerned, it’s registered as a Money Services Business with the Treasury and with FinCEN…It has applied and received a number of state licenses and will operate the same way that other wallets operate… As far as the Libra Association is concerned, these are active conversations that we’re having notably with the working group of the G7 as well as FINMA.”

Rep. Jim Himes, who questioned the foreign currency risk posed by Libra, said, “This [Libra] looks to me exactly like ETF backed by a series of short-term instruments and foreign currencies…Elaborate for me on why this is not an ETF…”

Marcus responded saying, “We believe that no one will buy Libra as an investment because it is designed for stability,” adding, “when you look at the definition of securities or Howey Test that has been used by the SEC, it actually uses the idea that you invest for a profit that will result in the management of the product and this product [Libra] is a payment tool, not going to be actively managed and you cannot use an ETF for payments.”

McHenry also delved into the Libra white paper and pointed out that it says that Libra will undergo a transition in five years from a permissioned system to a permissionless one. He asked,

“Post transition, how do you reconcile the need for controls which allow you to comply with any money laundering and KYC regulations with that decentralized notion of a fully decentralized digital currency?”

“The way that this will work is that the Association will still have the ability to set the rules when it comes to any money laundering programs, CFT and KYC requirements for the network.”

Maloney asked Marcus if they would be willing to “walk before they run” asking if he would commit to conducting a small pilot program limited to no more than 1 million users and overseen by the Federal Reserve and the SEC. When Marcus tried to evade the question, Maloney said that if they plan to launch the project without conducting a pilot project, there could be significant risks, adding:

“Libra Reserve could be managing too much money, which could make it systemic…too much money could be pulled out of banks in order to buy Libra…so the risks are very grave…It is my personal belief you shouldn’t launch Libra at all because the creation of the new currency is a government function and should be left to democratically accountable institutions that are accountable to the American people.”

With Marcus' repeated attempts to avoid committing to the pilot program, she finally said that if Marcus cannot commit to doing a pilot program first, Congress should consider stopping the project altogether.

Rep. Sean Duffy put up a direct question, “Who gets to use Calibra and Libra?” To that, Marcus answered, “Anyone who can open a Calibra account, go through KYC… in countries where we can offer.”

Holding a $20 bill in his hand, Duffy said that anyone can use this, adding “It does not discriminate.” To that end, he questioned, “With regard to your network, can Milo Yiannopoulos or Louis Farrakhan [both are banned from Facebook] use Libra?”

When Marcus tried to evade the question, Duffy pressed him to give a direct answer, to which Marcus responded saying, “I don’t know yet.”