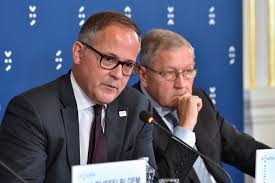 Facebook’s Libra can potentially address problems of the international payments market, Benoit Coeure, a member of the Executive Board of the European Central Bank (ECB) said, stressing that it is “undoubtedly a wake up call for policymakers and central banks.”

Speaking at a hearing on the topic “Digital currencies, focusing on Libra” in Berlin on Sept. 25, Coeure said stablecoins, such as Facebook’s Libra, can offer cheaper, faster, and more transparent financial facility to 1.2 billion people around the globe, stating it can be a “truly global footprint.”

He further underscored the 2018 report of the World Bank that found that an estimated 1.7 billion people have no access to basic financial services, regardless of the fact that 1.1 billion people have mobile phones, with most having an Internet connection. Basing on the report, Coeure asserted that Libra can potentially help cater to these unbanked people, right on their smartphones.

Couere, who is also the chair of the Committee on Payments and Market Infrastructures, acknowledged the technological developments brought by the shift of financial and monetary system in the form of stablecoins like Libra.

“The demand for fast, reliable and cheap cross-border payments is bound to grow further in coming years. Policymakers and central banks should respond to these challenges,” he said.

On the other hand, he also recognized the implications Libra has for monetary policy and financial stability, as well as its possible use for money laundering and financial terrorism. Thus, he stressed the importance of data security, consumer protection, competition, and network stability.

As such, Coeure, who also leads the Group of Seven (G7) Committee, said regulations should be consistent and coordinately applied among global institutions, noting “same business, same risks, and same rules” should be implemented.

Coeure’s comments follow after Libra co-founder David Marcus recently wrote a blog post justifying the need to replace the existing payments system with blockchain-based payment networks. He underscored that Libra can conduct near real-time cross-border transfers at a lower cost without the need to pool liquidity of different countries.

The speech was also made amid global regulators scrutinizing Facebook, with some countries threatening to block it.