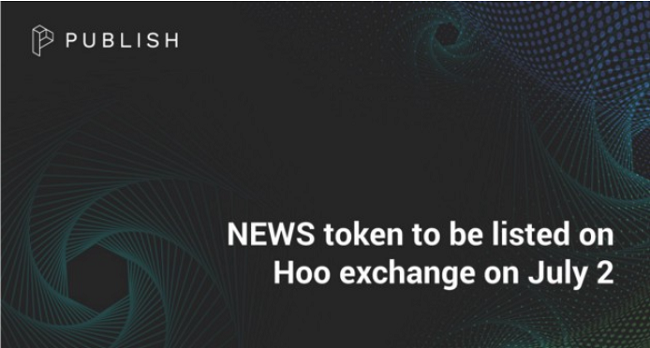 PUBLISH Inc., a provider of blockchain solutions for media businesses, has made an official announcement regarding the listing of its NEWS token.

In an online post on Medium, the company announced that NEWS will start trading on Hoo exchange at 15:00 KST (Korean Standard Time) on July 02, 2019. The token will be listed at the equivalent of $0.01 (USD) per token and can be purchased in EOS.

“The listing of NEWS on Hoo exchange is a major milestone for us in our mission to tokenize the news industry,” said Sonny Kwon, CEO of PUBLISH. “We plan to list the token on more exchanges going forward and will be announcing the details through our Medium channel in the forthcoming weeks.”

NEWS is PUBLISH’s proprietary token that will be used for every transaction within its news ecosystem. As a promotional offer, PUBLISH has announced a token giveaway in which the top five traders with the highest trading volume from 15:00 KST on 2 July 2019 to 15:00 KST on 9 July 2019 could win up to 100,000 NEWS tokens.

The listing comes on the heels of the launch of the beta version of PUBLISH’s decentralized hot wallet, called “PUBLISHwallet,” last week.