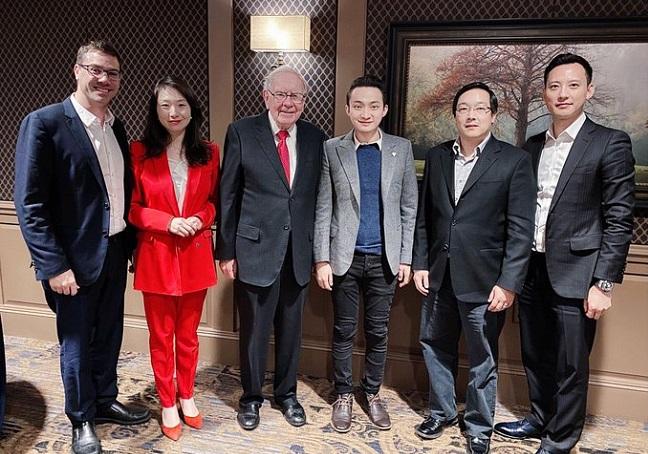 Last May, Sun had won the bid for Warren Buffett’s annual charity auction luncheon, after he placed a record-high bid of $4.57 million. He was allowed to bring up to seven of his friends to the private lunch with Buffet.

After postponement, the previously planned lunch in San Francisco was rescheduled on Buffett’s terms for a dinner in Omaha. Sun said that they discussed the future of cryptocurrency, blockchain, and other topics. He shared few details of the dinner in a series of tweets:

(8/12) @WarrenBuffett believes there is great potential in #blockchain & lots of his portfolio companies are exploring it such as @jpmorgan. He is curious to see how #blockchain will play out in the payment industry in the next 10 yrs. I have lots of work in store for me!

(9/12) @WarrenBuffett feels #Bitcoin still needs a lot of work in order to capture the value of #blockchain. I told Mr. Buffett #Bitcoin is the currency for the next generation, Mr. Buffett smiled and said “I’m sure my grandson would rather inherit my wealth in $USD.” LOL!

Sun also gifted bitcoin and TRX to the finance titan:

(2/12) @WarrenBuffett received his first #Bitcoin! This lucky #Bitcoin is safely stored in his #Samsung Galaxy Fold. Since I gifted him this #Bitcoin, $BTC has increased 16%! Hope it continues to moon! Check out his address: https://t.co/uyhT7gVQCo

(3/12) Brought Mr. Buffett 2 Galaxy Fold w/ #TRON built in. @WarrenBuffett is officially a $TRX owner! I gifted him 1,930,830 $TRX equivalent to his bday! Mr. Buffett joked he wished he was born later so that he could have more! Mr.Buffett address: https://t.co/n7gg5TfdIm

(4/12)Showed Mr. Buffett my collaboration w/ @SamsungMobile on the Fold & how to transfer $TRX from one to another. I transferred 45,67888 TRX equivalent to the auction bid & Mr. Buffett was impressed by the speed of #TRON! Check out the Txn: https://t.co/2QTvmIcEf5

“It was really an honor and I’m grateful for Mr. Buffett’s dinner, wisdom, and vision,” said Sun. “I'll always remember his kindness and support, and will take Mr. Buffett’s advice and guidance to make TRON a better ecosystem, business with all the partners in the blockchain space and beyond.”

Back in July, Sun had issued an apology for “over-marketing” his lunch with Buffett. “…because of my immature words, behavior, youth, and vigor, I spoke without thinking twice. It became a failing of over-marketing that out of my control…I ignored the responsibility of being a public figure. This was not my original intent,” he said at the time.