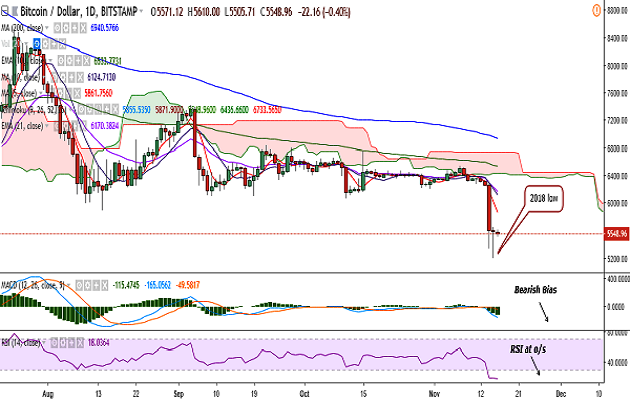 It's been nearly a year since bitcoin’s price peaked at almost $20,000 (all-time high). However, the story has taken a turn this year and bitcoin’s value plummeted to sub $6,000 in a matter of hours on November 14.

BTC/USD, after trading in a close range for the past couple of weeks, fell to $5,188 (Coinbase), 2018-low so far, on November 15. Many skeptics now believe that the “bubble has burst.”

That said, in the past year, the world also saw a tremendous growth in other cryptocurrencies and blockchain projects, with many believing that this is the time when developers and industry professionals are focusing on building lasting projects, attracting dedicated talent along the way.

Oliver Carding, the CEO of cryptocurrency new site CoinJournal and blockchain toy startup Crypto Kaiju, said that the drop in crypto market cap cannot be attributed to one particular reason.

“There’s been a few factors at play including regulatory pressure and general uncertainty and continued issues with security and scaling. The biggest cause is that the market was massively inflated and driven by hype last year, taking the crypto market to totally unsustainable levels,” Carding said. “Even taking speculation into account I feel that the current price levels are much more indicative of the current value cryptocurrencies when considering working use cases.”

“The significant drop in 2018 could be explained with the shorts, rebounds from over-speculation and some exchanges’ questionable activities. It’s likely that current market prices represent the actual value of the assets and that last year’s massive price increases were attributed to external factors such as market manipulation.”

Progress Made In The Past Year

Eric Piscini, former Global Head of Blockchain at Deloitte and current CEO of Citizens Reserve – a tech startup that recently unveiled their blockchain-based ‘supply chain-as-a-service’ platform, SUKU, believes that the progress made in the last year is significant. He further elaborated:

“In the past year, we have seen that bad actors and dubious projects are fading, which means the crypto market is cleaning up its act. People will not make money as quickly and easily anymore unless they put in the work to build their platform and strategically position their business.”

Propy CEO Natalia Karayaneva said that one key point of progress is the increased regulatory clarity around the world. This, in turn, has led to the STO (security token offering) wave, which, Karayaneva believes, aims to be “the next big thing in the coming year.”

“Also, the SEC has progressed in terms of its guidance for Token Sales. The fact that they declared Ether was not a security, but perhaps more importantly, a regulatory clarity, paints a clear picture of Ethereum's roadmap. The result? Ethereum 2.0, which was announced at Devcon4 earlier this year,” Karayaneva said, adding that cryptocurrency security exchanges got approvals and institutional investors accepted cryptocurrencies as the new asset class in the past year.

According to David Wachsman, CEO & Founder of Wachsman, the primary benefit of the 2017 bull run has been the mass influx of talent and capital driven to the crypto and blockchain space as a consequence of its newfound popularity.

“As a result, in 2018 we've seen the compression of the emerging tech hype cycle, an accelerated pathway towards robust base-layer and scalability protocols, and the establishment of more mature, revenue-generating businesses doubling down on blockchain in a multitude of markets,” he added.

Crypto Kaiju Co-founder Oliver Carding pointed out the technical progress made in the past year. He said:

“Lightning network implementations have launched and are steadily gaining users, people are using the ERC-721 standard to demonstrate really interesting use cases for non-fungible tokens within gaming that in time could become the stepping stones towards tokenizing more valuable assets. while many have complained about Ethereum's ability to compete with newer blockchains, they really proved at Devcon that they've spent considerable time testing and learning, putting them in a strong position to scale.”

Eric Piscini is highly optimistic about the forthcoming year. He expects the total market cap will triple from the price it is today, the industry will become more mature, clearer regulatory frameworks in the crypto and blockchain industry around the world, and more diversity in this space.

“What the industry has experienced in the past few years will serve as an example for investors and partners, which will help them to not make the same mistakes that have been made in the past,” he added.

‘Additionally, we will see a change in thinking around the status quo of the industry. For example, banks will not disappear next year, governments and states will remain for a few more decades, and intermediaries are not all bad. In the next year, I see the industry as focusing more on what we can change versus what is unrealistic.”

Carding believes that 2019 will be “a more stable year for cryptocurrencies” and expects some of the regulatory uncertainty to be resolved, which would open the door to companies who’ve been interested but reluctant to get involved with cryptocurrency and blockchain previously.

“I expect that the major cryptocurrencies will make advancements in both on-chain and layer 2 scaling, improving their usefulness and reducing the need for altcoins, the number of which I expect to massively decline over the next 12 months. In terms of price, I’ve been in the space for over 5 years and couldn’t call it. I would hope that as use cases and capacity increases so too does adoption,” he added.

Karayaneva sees 2019 to be all about tokenization of assets or the year of STOs, and said:

“Unlike other fledgling technologies, blockchain technology is very well developed and ready to handle a variety of use cases. 2019 would be all about tokenization of assets or the year of the STOs, and I am a huge proponent of the real estate asset tokenization, and I believe that in 2019 we will have at least 10 iconic and stable revenue generating properties tokenized.”

Wachsman said the next year will see consumer-grade dApps deployed far beyond the traditional borders of the crypto ecosystem and mainstream financial services institutions going into production with well-tested blockchain infrastructure.