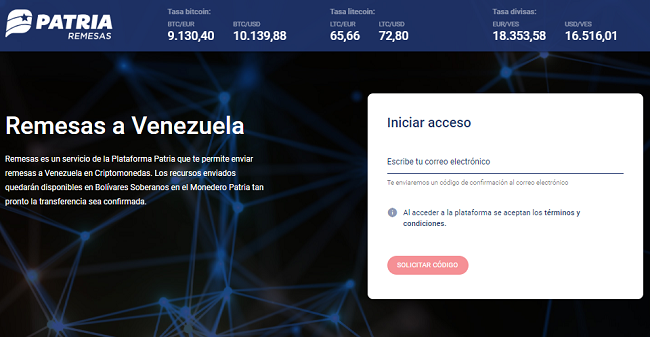 The government of Venezuela has announced that its cryptocurrency-based remittance platform is fully operational.

Called “Patria Remesas,” the platform will allow citizens working abroad to send money to Venezuela, Futurism reported citing the press release. According to the official website:

The platform “allows you to send remittances to Venezuela in Cryptocurrencies. The resources sent will be available in Sovereign Bolivars in the National Wallet as soon as the transfer is confirmed.”

Joselit Ramírez, the Superintendent of Cryptoactive and related activities of Venezuela (SUNACRIP), discussed the security of the platform during a radio broadcast.

"It is the easiest, easiest and safest way to send money," Ramírez said.

Ramírez urged citizens to save on Petro adding that “it is the only way that income is not depreciated."

"The Petro was a plan designed by the President of the Republic, Nicolás Maduro, to counter the attacks of imperialism and heal the wounds of war," he added.

Ramírez further explained that the cryptocurrency is a totally different financial instrument than the dollar. It was created to “shield and protect savings,” he added.

“The world is evolving, there is a new economic revolution that is coming to continue advancing in the country and contribute to the world economy. The traditional financial system is no longer enough. That's why cryptocurrencies arrived to open their eyes to the economic world,” he said.

[Some parts of the article have been written using online translation of the source.]