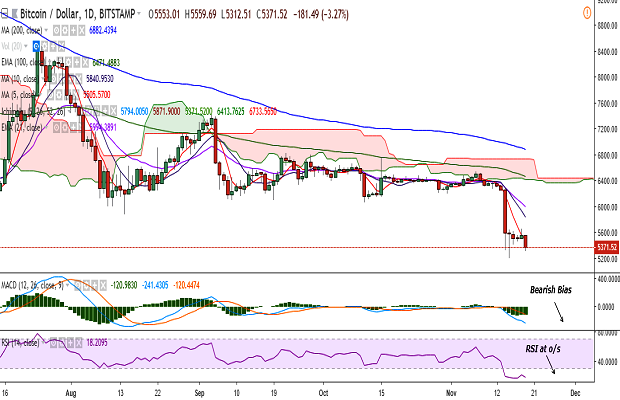 Tom Lee, co-founder of Fundstrat Global Advisors, has lowered his year-end target for bitcoin price to $15,000 from $25,000, CNBC reported.

Bitcoin price, which hit this year’s low at $5,188 on November 15 (Coinbase), is currently trading at $5,372 at the time of writing. While some crypto experts believe that current market prices represent the actual value of the assets, Lee is placing his bets on recovery.

According to Fundstrat's data science team, bitcoin’s break-even point – the level at which mining costs equal the trading price – is down to $7,000 from a previous estimate of $8,000 for the S9 mining machine by Bitmain. Lee expects bitcoin’s fair value to be roughly 2.2 times the new $7,000 break-even price, CNBC stated.

In a note to clients last Friday, Lee pointed out that even in the depths of a previous bitcoin bear market between 2013 and 2015, it "never sustained a move below breakeven."

"While bitcoin broke below that psychologically important $6,000, this has lead to a renewed wave of pessimism," said Lee. "But we believe the negative swing in sentiment is much worse than the fundamental implications."

Lee added that much of the weakness seen in bitcoin price recently was driven by "crypto-specific" events including the bitcoin cash hard fork. He expects more institutional involvement in the crypto space will boost prices by the end of this year and believes that the launch of ICE, Starbucks and Microsoft-backed Bakkt and Fidelity entering the market is "part of a broader creation of infrastructure necessary for institutional involvement.”

In an interview with The Street in June, billionaire crypto investor Tim Draper said that he expects “Bitcoin trade around the $250,000 mark in 2022.” Draper reaffirmed this bitcoin price target during a panel discussion at the Web Summit summit conference held earlier this month, CoinTelegraph reported.

Eric Piscini, former Global Head of Blockchain at Deloitte and current CEO of Citizens Reserve told TokenPost that he expects “the total market cap will triple from the price it is today.”

“In terms of price, I’ve been in the [crypto] space for over 5 years and couldn’t call it. I would hope that as use cases and capacity increases so too does adoption.”

That said, Carding emphasized that cryptocurrency market cap doesn’t really serve as a good indicator for the value of cryptocurrencies overall. He explained:

“There are still so many remnants of 2017’s ICO hype and as such there are dozens of assets listed that have no long-term value or hold purely speculative value for products and services that’ll never ship. I feel that usage and development are much better for determining progress with wallet sign-ups, the number of daily transactions and Github commits all being valuable indicators when determining value. Ethereum, for example, is the fifth fastest growing open source project on Github and demonstrates the hard work being applied to growing and improving the network.

Echoing similar views, Natalia Karayaneva, CEO of Propy, explained that while in the traditional world, one gauges a company’s value by its market valuation, it is not the same in the crypto space.

“In reality, the market cap is highly dependent on token creators and not so much the market or the product traction itself - similar to Telegram or other social media channels,” Karayaneva added. “These vanity metrics do not guarantee any success and the only people interested in them are the so-called HODLers. The HODL mentality is poisonous for the blockchain space. It’s time to BUIDL. KPIs for are specific for each project, but if I have to choose just one - they would be active (actual) users.”