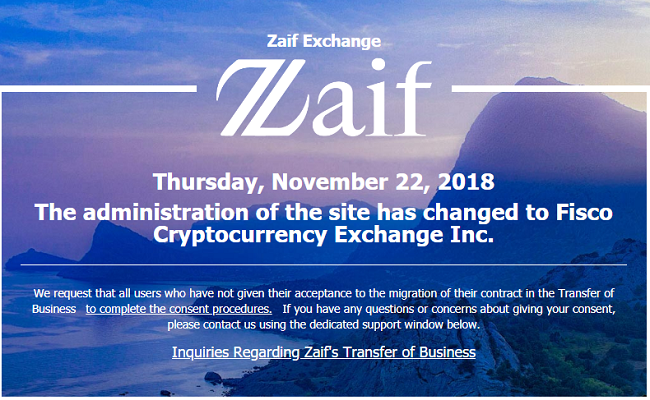 The acquisition follows a major hack suffered by Zaif in September in which hackers with unauthorized access were able to drain nearly $60 million in bitcoin, bitcoin cash, and MonaCoin from its hot wallets.

Following the hack, Japan’s Financial Services Agency (FSA) issued the third business improvement order to Tech Bureau. In response, Zaif issued an official statement that it has entered into an agreement with Fisco Digital Asset Group to receive a ¥5 billion (or $44.5 million) investment in exchange for a major share of ownership.

Zaif’s new owner, FCCE, will now take the responsibility of compensating users who lost their funds in the hack. Compensation proceedings are expected to begin before the end of this month, CoinTelegraph reported referring to a press release from FCCE.

FCCE also said that it will operate both the exchanges in parallel and plans to integrate the systems in the future. It further pointed out a number of security enhancements that have been made to Zaif’s platform including improving the robustness of the system (servers, networks, applications, etc.) and improvement of unauthorized access detection function.

In its official announcement, Tech Bureau revealed its plans to quit the cryptocurrency industry. It said:

“We will abolish the registration of our virtual currency exchange and plan to dissolve.” (via online translation)