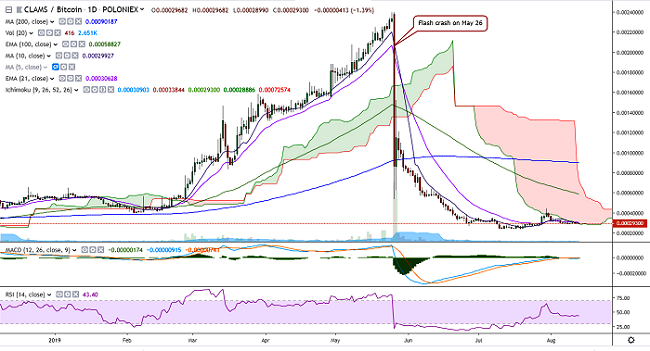 Cryptocurrency exchange Poloniex has announced that it is crediting trading fees to lenders who were impacted in the severe price crash in the CLAM market on May 26.

Margin lenders on the platform had lost around 1,800 BTC (approximately $13.5 million at the time) due to the flash crash. Poloniex said at the time that the “velocity of the crash and the lack of liquidity in the CLAM market made it impossible for all of the automatic liquidations of CLAM margin positions to process as they normally would in a liquid market.”

Poloniex had socialized the losses with 0.4 percent of Poloniex users lost 16.202 percent of their funds held in the pool, CoinDesk reported.

In an online post dated August 13, the Circle-owned exchange said that it will cover lost funds by crediting trading fees back to impacted lenders through June 06. Earlier in June, Poloniex had distributed over 180 BTC proportionally across impacted lenders (representing about 10% of the generalized losses).

“Starting later in August, if you are an impacted lender, you will be credited your Poloniex trading fees until your losses are fully recovered. Every time you pay a trading fee, we will convert the fee to BTC and then credit you those fees each day. Your first credit will include all the trading fees you have paid since June 6, 2019,” the blog post reads.