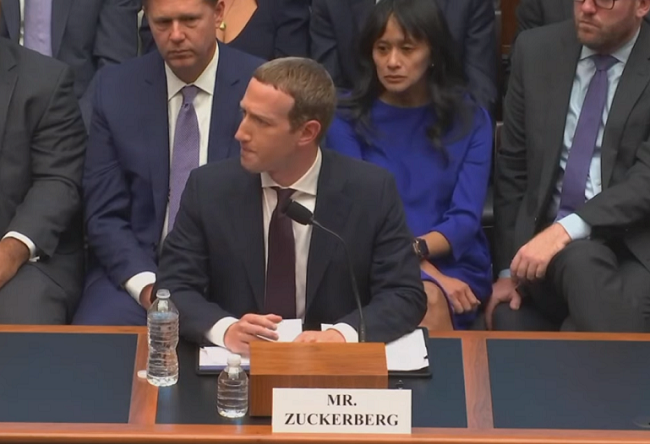 Facebook CEO Mark Zuckerberg faced members of Congress on Wednesday, October 23, on the social media giant’s plans to launch its own cryptocurrency.

Further underscoring the scale and reach of the company, Waters said that Facebook’s “global debt digital currency” would challenge the US dollar, adding that this plan has opened up a serious discussion about whether “Facebook should be broken up.”

Given Facebook’s previous track record, Zuckerberg, quite anticipating the resistance from the Congress, said, “The financial industry is stagnant and there is no digital financial architecture to support the innovation we need. I believe this problem can be solved, and Libra can help… I get that I’m not the ideal messenger for this right now.”

“We’ve faced a lot of issues over the past few years, and I’m sure people wish it was anyone but Facebook putting this idea forward,” he added.

Rep. Nydia Velázquez put up a straight forward question, “Why should we believe what you and Calibra are saying about protecting customer privacy and financial data?” Further underscoring Facebook’s privacy scandals related to data breaches and the Cambridge Analytica affair, she queried (as quoted by The Verge), “Do you understand why this record makes us concerned with Facebook entering the cryptocurrency space? Do you realize that you and Facebook have a credibility issue here?”

Rep. Ayanna Pressley even went on to ask if Zuckerberg would leave behind his children’s inheritance in Libra and adding “You’ve proven that we cannot trust you with our emails…with our phone numbers…so, why should we trust you with our hard-earned money?”

When questioned about the recent departures of major backers including Visa and Mastercard by Rep. Ann Wagner, Zuckerberg said that the company probably left because Libra is a “risky project and there’s been a lot of scrutiny.”

Zuckerberg insisted that the project would not launch until it secures approval from all relevant regulatory bodies.

Rep. Carolyn Maloney (D-NY) asked the CEO to provide a list of all the regulators the project would seek approval from. Zuckerberg, however, has not provided a full list, The Verge reported.

Should the Libra Association decide to move forward without this regulatory approval, Zuckerberg said that Facebook “would be forced to leave the Association.”