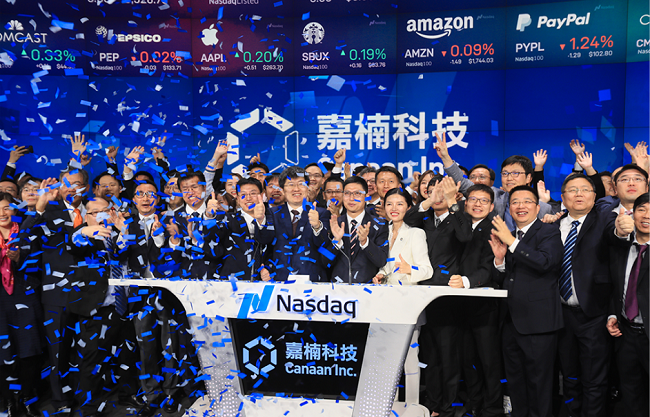 Canaan Creative, a leading bitcoin mining equipment manufacturer, listed its shares on Nasdaq under the ticker symbol “CAN,” priced at $9, on November 22.

We're pleased to announce that @canaanio, the world’s leading supercomputing solution provider, has joined the Nasdaq family. $CAN pic.twitter.com/XNLSUbE6KL

Canaan Inc. is set to debut on the Nasdaq Global Market on Thursday and become the first cryptocurrency mining equipment maker to list in New York. pic.twitter.com/9371IgAz6v

The Block reported that the firm raised a total of $90 million in its initial public offering (IPO) by offering 10 million American depositary shares (ADS). The first hour of trading saw Canaan’s shares trading as high as $11.23, before plummeting to below $9 within 30 minutes.

As reported previously, the firm was seeking to raise $100 million in the IPO, having put a placeholder amount of $400 million in late October. According to the details on Crunchbase, Canaan’s valuation at IPO is $1.4 billion.

According to an online post by BlockTrain, Canaan’s offering was managed by Citigroup Global Markets Inc., China Renaissance Securities (Hong Kong) Ltd., and CMB International Capital Ltd. With its IPO, the firm intends to expand the development of AI-applications for ASICs.

Founded in 2013, Canaan is the manufacturer of high-performance integrated circuits and is the company behind the Avalon bitcoin mining machines. The company previously sought listings in China and Hong Kong in August 2017 and May 2018, both of which were subsequently suspended.

I am a cryptocurrency trader and i make over 200% daily, If you are interested,i can teach you how to trade and also help you achieve your goal in life with crypto i can turn
$4500 into $35000 in less then four weeks,now that bitcoin has low prices...please note that cryptocurrency trading is bitcoin unlike binary and Forex,bitcoin is traded for altcoins also you can reach to me if you are new to bitcoin and to give you more info and guideline on how to invest smartly, this is opportunity life time knocking on your door ???? inbox me for more info....contact me on WhatsApp +1(206)-742-5358 thank you to you all and God bless you ......
More
Breaking
Jun 20, 2021 (Sunday)