What do Jeff Bezos, Bills Gates, Mark Zuckerberg and Warren Buffett think of crypto and blockchain? 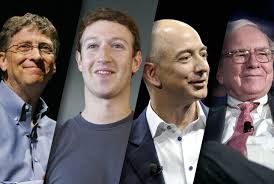 The richest men in the world have different perspectives on blockchain and crypto.

Jeff Bezos is the richest man in the world today with a net worth of $130 billion. There are rumors that the Amazon founder has invested in Bitcoin. However, he never confirmed it. Also, Amazon denied any plans to accept Bitcoin or any other cryptocurrency on its platform.

In 2014, the Microsoft founder showed enthusiasm about bitcoin even telling Bloomberg that it was better than any cryptocurrency. However, his position eventually changed noting that the anonymity of digital currencies isn’t good for transactions.

“Bitcoin and ICOs, I believe completely [they’re some] of the crazier, speculative things,” Gates said. However, he added that the blockchain technology had its merits.

The Facebook founder has a positive view of blockchain and cryptocurrency. In fact, Facebook is launching its own cryptocurrency called “Libra.” The cryptocurrency is considered a threat by many as it may compromise the world’s fiat currencies.

Zuckerberg has a positive stand about blockchain technology, too. “The technology powering Bitcoin could help improve Facebook in the future,” Zuckerberg said in 2018.

Berkshire Hathaway CEO and Chairman Warren Buffett is not into cryptocurrencies as well. In fact, in a recent interview with CNBC’s Becky Quick, he said that “cryptocurrencies basically have no value and they don’t produce anything.” He also said that he doesn’t have any cryptocurrency and has no plans to invest in it.

Meanwhile, according to Justin Sun, founder of cryptocurrency TRON and CEO of file-sharing firm BitTorrent, Buffett was convinced of the potential of blockchain. Many of Buffett’s portfolio were exploring it, but he felt that bitcoin needed a lot of work to capture the value of blockchain.

I am a cryptocurrency trader and i make over 200% daily, If you are interested,i can teach you how to trade and also help you achieve your goal in life with crypto i can turn
$4500 into $35000 in less then four weeks,now that bitcoin has low prices...please note that cryptocurrency trading is bitcoin unlike binary and Forex,bitcoin is traded for altcoins also you can reach to me if you are new to bitcoin and to give you more info and guideline on how to invest smartly, this is opportunity life time knocking on your door inbox me for more info....contact me on whatsapp :+12067425358 happy new year to you all .
More
Breaking
Mar 8, 2021 (Monday)