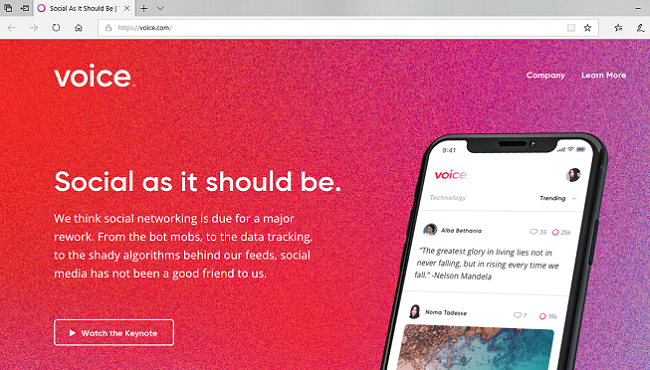 EOS developer Block.one has paid $30 million in cash in a bid to buy the domain name for its recently announced blockchain-based social media platform “Voice.”

In a press release dated June 18, enterprise analytics and mobility software company MicroStrategy announced that it sold the Voice.com domain name for $30 million in cash in a transaction facilitated by GoDaddy and consummated on May 30, 2019.

“The domain name has subsequently been used by Block.one to launch its new blockchain-based social media platform called Voice,” the release said.

Marge Breya, senior executive vice president and chief marketing officer at MicroStrategy, said that the word “voice” is not only simple and universally understood, but also “ubiquitous” and returns billions of results on the internet as a search term.

Earlier this month, Block.one announced its plans to launch Voice on the EOS blockchain. The platform, it said, will encourage content creation, sharing, discovery and promotion by real users, not bots and fake accounts, and the value of good content will get circulated right back into sustaining the community.

On Tuesday, social media giant Facebook published the white paper for its cryptocurrency project, called Libra. Since the announcement, policymakers across the globe have expressed their concerns over the initiative.