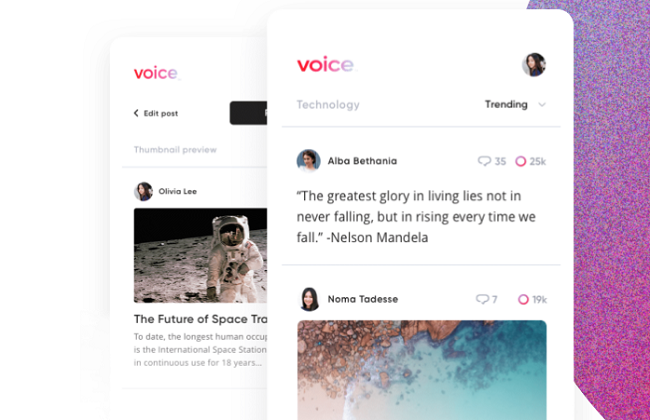 Called “Voice,” the social media platform will be launched on the EOS Public Blockchain. It will encourage content creation, sharing, discovery and promotion by real users, not bots and fake accounts, and the value of good content will get circulated right back into sustaining the community.

Brendan Blumer, CEO of Block.one, pointed out that existing media platforms have been designed to “use their users.”

“Just look at the business model. Our content. Our data. Our attention. These are all incredibly valuable things. But right now, it's the platform, not the user, that reaps the reward. By design, they run by auctioning our information to advertisers, pocketing the profit, and flooding our feeds with hidden agendas dictated by the highest bidder. Voice changes that,” he added.

Through Voice, users will directly benefit from their ideas and engagement on the platform, Block.one explained. Importantly, all the interactions taking place on the platform will be public, bringing more transparency to the users. It emphasized that there are “No hidden algorithms, no invisible interests.”

Block.one has collaborated with Coinbase to educate its user base on the EOSIO software through their Coinbase Earn program. This "earn as you learn" online course will educate users on the benefits and functionality of EOSIO.

More recently, Galaxy Digital sold the majority of its share in Block.one for $71.2 million. Soon after, a report from Bloomberg suggested that the company was eyeing a buyback of its stocks. Block.one is reportedly planning to return as much as 6,567% to its earliest investors in less than 3 years.