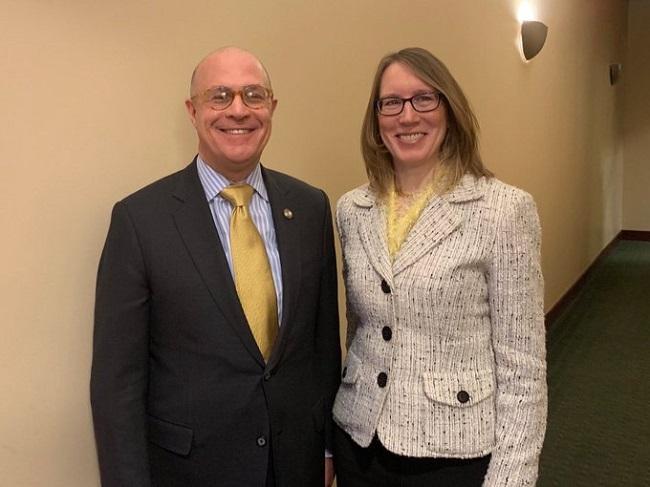 United States Securities and Exchange Commission (SEC) commissioner Hester Peirce expressed her support in establishing a non-exclusive safe harbor for token offerings, according to a copy of her keynote speech during Singapore University of Social Sciences’ convergence forum sponsored by Jenga BGC.

“Regulators have had to follow the lead of the markets and work with their foreign counterparts… Absent an explicit decision by citizens of a jurisdiction to cede their regulatory authority to an international organization, a jurisdiction should determine what rules work best for its investors and markets,” she said.

Known as Crypto Mom in the crypto community, Peirce suggested how the U.S. can draw from the regulatory framework of other countries in setting its own policies.

“The U.S. SEC can look to our counterparts overseas for ideas in untangling some of our most difficult legal and policy questions in this area.”

“Crypto regulation affords international regulators the opportunity to learn from one another … The resulting regulatory competition will allow us to see what works well and what does not work at all.”

Peirce mentioned several countries where the U.S. can look up to. She first cited Bermuda, where crypto custody is addressed in-depth, issuing regulatory regime for crypto businesses and draft guidance for crypto custodial services. She also noted the security token approach of Singapore and commended the country for being at the fore-front of much crypto-related activities. She further talked about Hong Kong’s licensing and sandbox regime, as well as the crypto regulations of Japan, Thailand, Malta, Switzerland, and France.

As for the regulatory approach of the U.S., she underscored its notable and atypical features. For instance, she pointed out that the SEC only regulates securities, whereas other regulators oversee other areas like commodities and currencies.

“One of the peculiarities of the U.S. system is the sheer number of regulators. Not only do we have the state-federal allocation of responsibility that I just mentioned, but we have multiple federal financial regulators.”

She also described the definition of securities as “a bit nebulous,” noting that the U.S. does not have an exclusive list of what constitutes a security.

While admitting these lapses, SEC is increasing its efforts to understand and regulate digital assets. In fact, the commissioner revealed that it has established a strategic hub called FinHub for fintech and innovation to coordinate SEC’s approach to crypto-assets.

She said that its employees have met with hundreds of market participants “to hear what they are working on and where they need regulatory clarity.”

Peirce highlighted that she aims to “see more focused momentum” at the SEC towards completing crypto regulation so that the U.S. will remain competitive when luring crypto businesses.

“While I believe a single global regulatory framework would be unwise, regulators can create a healthy environment for this new market to grow by sharing information that will smooth cross-border transactions,” she concluded.

Peirce was one of the speakers along with Su Hui Tay, Monetary Authority of Singapore’s Deputy Director.

The forum, entitled “SUSS Convergence Forum: Inclusive Blockchain, Finance, and Emerging Technologies” gathered officials from financial institutions, subject experts, and industry practitioners from around the world. They were tasked to talk about regulatory policies governing digital currencies in different jurisdictions and the application scenarios and future trends of blockchain.

The informative event, held last July 30, involved five-panel discussions and was attended by more than 500 people.