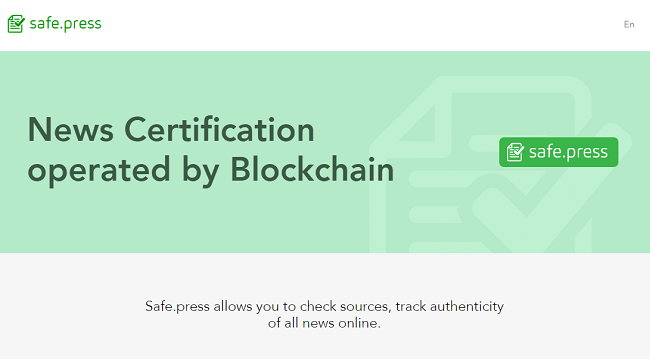 Telecom operator Orange has announced the launch of a new platform that aims to facilitate mutual authentication of online news based on blockchain technology.

Called “Safe.press,” the blockchain-powered platform has been developed by French startup Block Expert.

In its press release dated March 27, Orange described the platform as a “consortium-based certification system, which is immediately recognizable by the green "safe.press" badge.” Safe.press will allow checking sources and tracking the authenticity of all news online.

According to the official website, Safe.press saves each news item in its Blockchain ledger, which is safely hosted by all members of the consortium.

Orange has become the first member of Safe.press and the first company in the world to display on its web-pages a “blockchain-secured digital trust label” that will allow checking the authenticity and source of the online content in real-time in just one click.

“From now on all press releases published by Orange will be verifiable in the press room on orange.com by clicking on the green "safe.press" badge,” Orange said.

Benjamin Gievis, co-founder of Block Expert, said that Orange’s participation will enable the Safe.press initiative to become a major technological response to the fake news phenomenon.

“I am very proud that Orange is taking this initiative to contribute in the fight against fake news that has become a major affliction of our time. Orange's communication will now benefit from Block Expert's blockchain solution that fits perfectly alongside our key watchwords: trust, security and innovation,” Béatrice Mandine, Executive Director in charge of Communications and Brand at Orange, said.