FxWirePro: BTC/USD rangebound below 8,500, bias bullish, analysts see potential for run up to 10,000 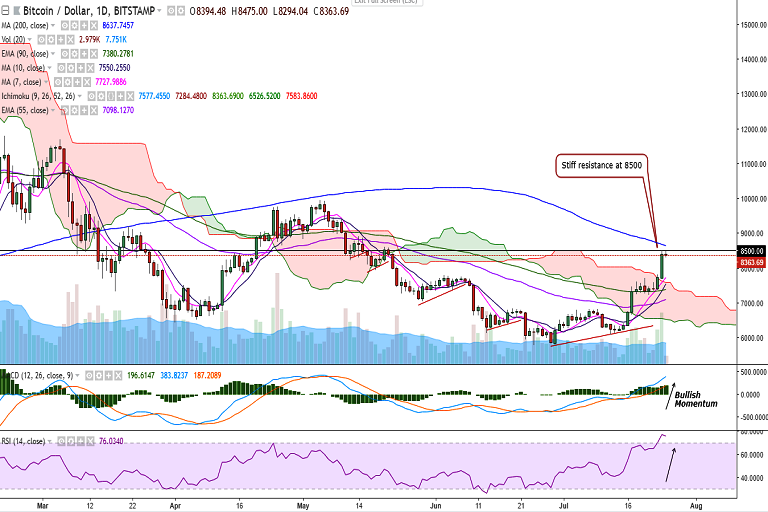 BTC/USD surged to near 8500 levels on Tuesday and is currently trading at 8322 levels at the time of writing (Bitstamp).

Bitcoin price has jumped by over 15 percent so far this week. The spike seems to be driven by the positive news coming from South Korea, as well as growing institutional interest.

Mati Greenspan, Senior Market Analyst at eToro, said that the bitcoin price surged following an announcement from the Bank of Japan (BoJ) on July 23 that they are willing to buy unlimited amount of bonds.

“The crypto market is usually fairly disconnected from the day-to-day activities of central banks. But over the past few days, the BTC price rally gave us a taste of what can happen when markets get a whiff of upcoming policy changes by the market's largest players,” he said. “The reaction came swiftly as many analysts feel that this is simply a precursor to deeper changes in the BoJ's policy.”

Following the announcement, Japanese Bond Yields went through the roof, while the price of bitcoin spiked notably finding fresh new highs, he noted.

“A quick look at the global volumes confirms that this trading action did indeed occur predominantly in Japanese Yen. It seems that Japanese traders have their own ways to hedge the actions of their central bank,” Greenspan said, that bitcoin price surpassing the key psychological level of $8,000 is “clearing the way for a potential run up to $10,000.”

According to Nolan Bauerle, Director of Research at CoinDesk, bitcoin can behave as a type of reserve currency for the entire digital asset system.

“Over the past month, we’ve seen the bitcoin dominance index jump up to 47%, or back to levels seen last December. This suggests that there is perhaps some risk management on the part of altcoin holders which has spiked demand for bitcoin,” Bauerle added.

Josiah Hernandez, Chief Strategy Officer at Coinsource, noted that while bitcoin price has become the most observed metric by which onlookers gauge its success, it is “largely inconsequential” to the digital currency’s mainstream adoption and appeal to investors and consumers.

“Despite being in a bear market since December, bitcoin has facilitated the transfer of over $2.3 trillion USD in notional value year-to-date, with a median daily transfer value of $9.8 billion. In regards to its competitiveness as a payment rail, median transaction fees have decreased from over $10.00 per transaction during peak to current levels of under $0.30 per transaction. Additionally the recently launched lightning network brings transaction fees down to under $0.01 per transaction and brings transaction capacity up to 1 million transactions per second. Scalability at the base layer has also been addressed with segwit adoption and as well the Schnorr signature proposal,” Hernandez observed. “In short, investors subscribed to the investment thesis of bitcoin as the protocol for value transfer over the internet should view recent developments as positive, regardless of price action.”

Technical indicators are bullish on the daily charts. The pair is trading in a narrow range today as it faces stiff resistance at 8500 levels. We could see some consolidation around this level, but overall bias is bullish.

“Technical analysis supports a bullish pattern as Bitcoin tends to rebound after it trades below its 200-day moving average. Plus, we have seen constructive commentary supporting Crypto ETF products, which could help unlock interest among institutional investors. While speculators might attribute the ongoing crypto bear market to the launch of derivatives trading in December last year, we view recent developments at the SEC and the Chicago Board Options Exchange as progress,” Rohit Kulkarni, Managing Director, Private Investment Research at SharesPost, said.

Call Update: We recommended staying long in our previous call. The pair has almost hit TP2.