Enjin Coin skyrockets on confirmation of partnership with Samsung 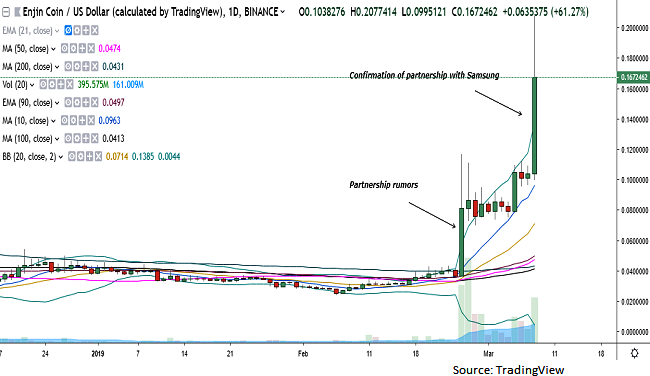 Rumors about the partnership first started circulating on February 25, which led to a massive spike in ENJ.

Enjin today confirmed its partnership with Samsung Electronics to CoinDesk but refrained from disclosing further details.

Soon after reports started floating in the media about the partnership’s confirmation, ENJ skyrocketed by over 100 percent to $0.2077. It is currently trading at $0.1665 at the time of writing (Binance).

While showcasing S10’s Blockchain Keystore feature at MWC Barcelona 2019 in February, Samsung had displayed a picture that included the logo of the Enjin crypto gaming platform.

Earlier this month, Enjin announced its Blockchain Software Development Kit (SDK), which is slated to launch on March 14.