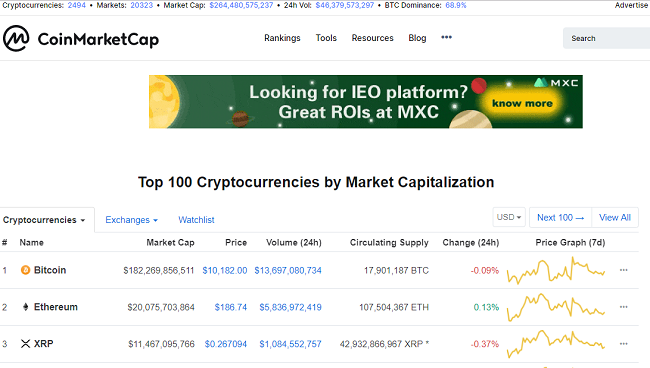 CoinMarketCap (CMC), a provider of price and market cap data for cryptocurrencies, will announce a new liquidity ranking system on November 12, Cointelegraph reported.

The initiative has grown to include more members including BitGo, Messari, Bitrue, Coinfloor, Bithumb, Coinsuper, Bibox, Switcheo Network, TokenInsight, and others.

As per the report, during the first virtual roundtable of DATA held on August 27, CMC proposed three areas for general consideration by the alliance members – the use of liquidity metrics, self-reported data and a unified crypto asset ID database. In addition, a self-reporting data dashboard will be rolled out on October 14.

CMC said that ranking exchanges on the basis of liquidity could be problematic as it is non-numeric, changing constantly, and difficult to record and report. It added that they could retain the volume metric, provided it is redesigned to make it difficult to tamper.

In addition, CMC is also seeking to encourage transparency in the crypto space. To that end, it has proposed rewarding cryptocurrency exchanges with “badges” for revealing data points, such as KYC, office location and shared order books with other exchanges.

Earlier in May, CMC had said that exchanges failing to provide mandatory data would be excluded from all price and adjusted volume calculations on its site, starting June 14.

In June, CMC announced the acquisition of Hashtag Capital and said that they will together work to further develop pricing algorithms and continually improve CMC’s data offerings.