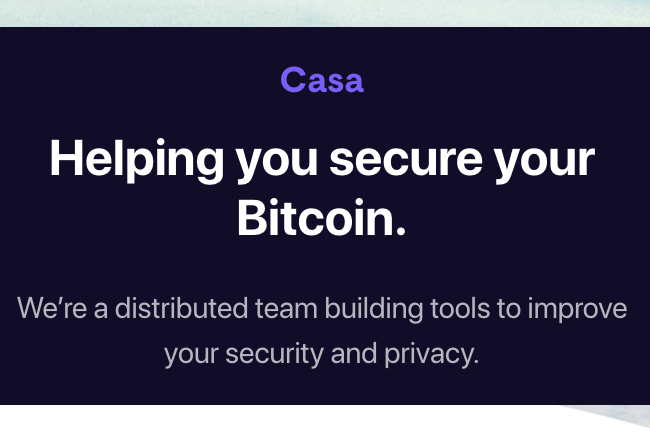 Bitcoin startup has named Nick Neuman as its new CEO following Jeremy Welch’s resignation. James Lopp, a Bitcoin and privacy expert, will remain as the company’s CTO and will join the board along with the new CEO, CoinDesk reported.

I’m incredibly excited to be taking the helm at Casa, and we have a big year planned for 2020!

This year, we’re fully focused on bringing easy to use, amazing security to Bitcoiners everywhere. https://t.co/t7wMxZlBgk

Welch said that he has stepped down from his role due to a major family health issue.

“To lead Casa forward, I have asked Nick Neuman to lead as CEO, and I’ve asked both Nick and our CTO Jameson Lopp to join Casa’s Board of Directors as Cofounders. I’m grateful that they’ve both accepted,” Welch wrote. “I will continue to support Nick, Jameson and the Casa team as an Advisor and shareholder.”

Based in New York, Casa aims to help consumers store their cryptocurrencies in a secure manner. The company has decided to no longer build the Casa Node. Welch said in October that the company shipped over 2,000 devices to its buyers in over 65 countries worldwide.

Casa is doing away with the physical implementation of its node in a bid to boost its subscription service. In an online post, Neuman said that they are open-sourcing the Casa Node so that anyone can build it on their own hardware.

"We have some exciting updates to our Casa Gold membership. Casa Gold will now only cost $10/month (billed annually). That means 2-of-3 multisig and peace of mind that your bitcoin is safe now costs less than your Netflix subscription," he wrote.

For this year, he revealed that Casa will be laser-focused on Keymaster, its multisig solution for Bitcoiners’ peace of mind. Updates planned for this solution include inheritance features allowing users to pass on your bitcoin to your loved ones after they pass away, new hardware wallet integrations, and making Keymaster even easier for all Bitcoiners, among others.

The company is also working on new hardware wallet integrations. Neuman told CoinDesk that they are close to integrating with bitcoin-only wallet, Coldcard.

“Holding your own coins, and your own private keys, unlocks the true value and vision of Bitcoin: the ability to have full control and full sovereignty over your money,” he wrote. We are focusing our efforts at Casa on making it easy for everyone in the world to secure their bitcoin.

I am a cryptocurrency trader and i make over 200% daily, If you are interested,i can teach you how to trade and also help you achieve your goal in life with crypto i can turn
$4500 into $35000 in less then four weeks,now that bitcoin has low prices...please note that cryptocurrency trading is bitcoin unlike binary and Forex,bitcoin is traded for altcoins also you can reach to me if you are new to bitcoin and to give you more info and guideline on how to invest smartly, this is opportunity life time knocking on your door ???? inbox me for more info....contact me on WhatsApp +1(206)-742-5358 thank you to you all and God bless you ...............................,,,,,,,

At first, I suspected the call was illegitimate, but I was eventually worn down by the tactics used by the fraudsters. They knew some of my personal information, and one of the caller's numbers showed up as "York Regional Police" on my cell phone. Eventually, I was convinced to withdraw $17000 from my bank and take it to a convenience store in Richmond Hill, where i deposited the money into a Bitcoin ATM. The machine converted the cash to Bitcoin and transferred the funds to the caller. Have never heard of Bitcoin before receiving the call. They made me believe that it was a machine used by Revenue Canada to transfer money quickly, after few hours I began to realize what had happened contact: (ULTIMATEFUNDRECOVERY),GMAIL,COM
WHATSAPP:+14079061584
TEXT: +14079061584
NO UPFRONT PAYMENT
More
Breaking
May 11, 2021 (Tuesday)