$4.4B lost to cryptocurrency thefts and scams in 2019: CipherTrace 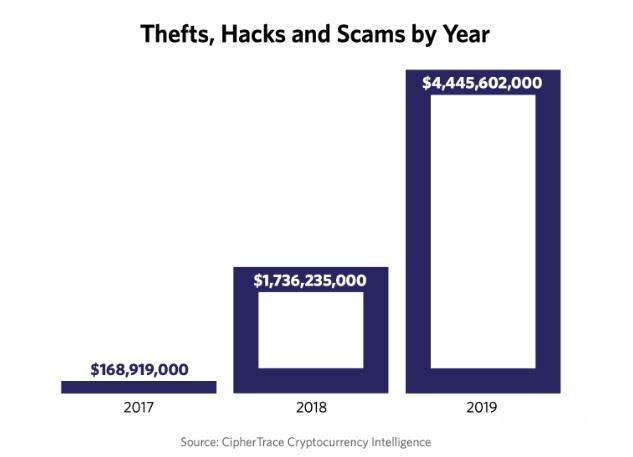 The cryptocurrency industry has lost a staggering $4.4 billion in thefts and scams so far this year, according to crypto analytics firm CipherTrace.

The company has released its Q3 2019 Cryptocurrency Anti-Money Laundering (AML) Report, which touches upon a number of areas including cryptocurrency regulation, nefarious actors within the ecosystem, impending legislation, international trends and prevailing sentiments.

CipherTrace conducted a comprehensive investigation of cryptocurrency exchange Know Your Customer (KYC) procedures and found that two-thirds (roughly 65 percent) of the top 120 exchanges lack strong KYC policies. This is quite alarming as countries worldwide have only seven months left to pass laws and virtual asset service providers (VASPs) to comply with the FATF guidelines announced in June this year.

The Travel Rule requires VASPs to securely transmit (and store) sender and receiver personally identifiable information (PII) with any cryptocurrency transaction valued at or exceeding USD/EUR 1,000. Consequently, stringent KYC is necessary to meet the Travel Rule’s base requirements.

CipherTrace pointed out that the Travel Rule has proven particularly problematic for ‘privacy coins’ that are designed to obfuscate money transmitter data. Of late, many exchanges have pre-emptively removed privacy coin listings in expectation of regulatory crackdown.

However, 32 percent of exchanges, including those determined to have weak KYC, still have privacy coins listed, according to the report. Based on its analysis, CipherTrace said that recent reports of the death of privacy coins have been “greatly exaggerated” and has outlined the statements from the top privacy coin developers on how they could comply with the Travel Rule.

As per the CipherTrace Q3 CAML report, there has been a significant reduction in cryptocurrency crime in the third quarter after two years of large, high-profile exchange hacks and exit scams.

CipherTrace said that while it does not have any hard data to explain the Q3 dropoff, it believes that government regulation of the industry could be a contributing factor. It also believes the anomalous nature of the QuadrigaCX and PlusToken frauds to have skewed the numbers in previous quarters.

The report further pointed out the increasing regulatory clampdown on virtual asset transactions in Q3 as regulators, crypto exchanges, banks and financial institutions prepare for the Travel Rule to take hold of cryptocurrency businesses.

“CipherTrace cites maturing and sophisticated terrorist and criminal syndicates as partially responsible for the global regulatory clamp-down on cryptocurrency. Terrorists, other criminal organizations and their supporters and sympathizers are constantly looking for new ways to raise and transfer funds without detection or tracking by law enforcement. As regulators continue to stifle resources for criminal cryptocurrency use, terrorists are using more sophisticated methods to secure funding and launder money for operations and attacks,” it said.