$1.8B injected into blockchain projects via VC funding so far in 2018 – Study 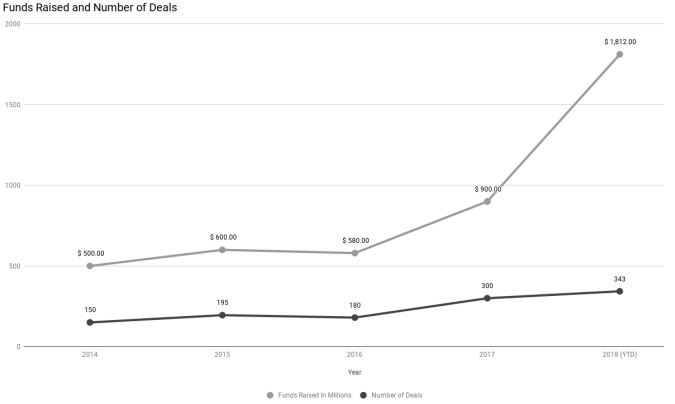 Research analyst Joel John said that the focus on the price of publicly listed tokens is “misguided as a proxy of ecosystem health” and said that “the broader blockchain ecosystem is experiencing rapid growth and maturation.”

Substantiating this with facts, he pointed out that 343 deals have collectively raised nearly $1.8 billion so far this year in venture capital and there have already been 30 M&A deals.

The report pointed out the ongoing efforts to build, experiment, and deploy blockchain solutions by some of the biggest companies of the world including Walmart, Google, and Baidu, among others.

“With million and billion-dollar businesses getting involved in the space, we expect to see a renewed focus on user experience and making it easier for developers and consumers to interact with blockchain technology,” it said. “Much like the average Gmail user does not know about SMTP (Simple Mail Transfer Protocol), we will soon see blockchain applications being used without users being aware of the technology itself.”

“The [blockchain] ecosystem is maturing. It is growing, becoming more diverse and serving more use cases than ever," it concluded.