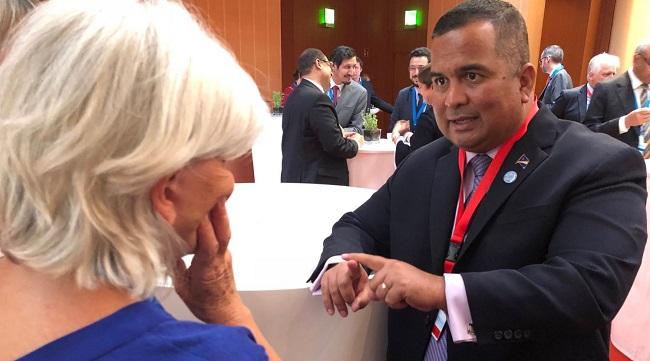 An official from the Marshall Islands has published an essay that underscores the nation’s goals for a national cryptocurrency project ahead of the Invest: Asia 2019 conference.

The post, which is written by the Honorable David Paul, the Minister In-Assistance to the President and Environment of the Marshall Islands, tackled the issuance of Marshallese sovereign (SOV), which is a blockchain-based crypto that will be circulated and operated by government and will be used as a medium-of-exchange along with the U.S. dollar.

“Issuing a currency is of course the prerogative of any sovereign nation, but what is unprecedented is that we have chosen to issue our sovereign currency using blockchain technology,” he pointed out.

In 2018, the country already passed a Sovereign Currency act, which will lay the foundation of a national digital currency, substituting the U.S. dollar as the primary currency. Marshall Islands receives nearly $70 million of aid money from the U.S. every year to meet its expenses, but now, it wants to stop this reliance.

Although the nation has gained its independence since 1979, it still uses the U.S. dollar for payments, debts, taxes, dues, and public charges.

In the essay published by CoinDesk, Paul noted that the nation’s decision to issue a blockchain-based legal tender was based on a conviction that a centralized system is not feasible for a country with a little over 50,000 people scattered across more than 1,000 Pacific islands.

He further explained that decentralized blockchain would provide compliance “baked into the currency protocol itself while maintaining privacy for individuals.” In addition, the minister further emphasized that the technology enables the state to automate that could reduce the cost of compliance obligations and to take a proactive role in the global fight against money laundering and terrorism funding.

The currency will also help lower the costs of remittance services, which are still very expensive for its citizens.

Paul also addressed concerns of the currency’s security, assuring that banks and exchanges will verify the identity of SOV users and control any loopholes that might happen because of oversight. He believes such measures can also enable the country to protect the financial privacy of its citizens.

“It is crucial that individual users should have a reasonable expectation of privacy – specifically, the ability to choose when to disclose your information, what exactly to share, and with whom,” he noted.

The minister also guaranteed that the SOV will follow a fixed, tamper-proof money supply and that its growth will be predetermined at 4% per year.

“We chose to create a fixed money supply with fixed growth because fiat currencies can be remarkably unstable… The policies of major central banks are not reassuring, as the gold and bitcoin prices attest. We as governments need to take a more sustainable approach to money, and not treat it as a limitless resource,” he argued.

For citizens to use the SOV currency, they will be asked to complete ID verification through a local bank or exchange. This will also enable the government to monitor transactions to prevent being exploited.

Marshall Island is also coordinating with other regulatory authorities worldwide to ensure that the SOV meets all compliance requirements, which will also permit the currency to be integrated into other existing international financial system.

“By issuing a currency that is not physically embodied in cash, that can travel the globe instantly, and that is tamper-proof and completely secure, the Marshall Islands will finally be connected to the global financial system on its own terms,” he stressed.

In June, it can be recalled that the nation has formed a non-profit organization to help the government establish, maintain, and implement the SOV. Dubbed as the SOV Development Fund, it aims to develop and maintain long-term SOV framework, promote SOV and its domestic and international use, establish a crypto-based friendly environment around the SOV, and smooth the volatility by selling and buying SOV against the U.S. dollar.