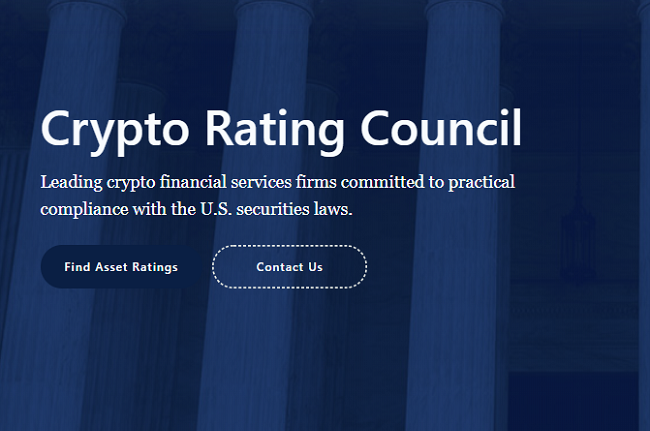 Cryptocurrencies have been around for more than a decade now. As the ecosystem continues to grow and flourish, it calls for more proactive efforts from various participants – cryptocurrency exchanges, custodians, wallet providers and others – to ensure the protection of investor interests.

The CRC aims to issue a 1–5 rating for cryptocurrencies or token’s similarity to a security. A rating of 1 indicates a crypto-asset has only a few functional similarities to a security, whereas 5 means it is consistent with a security’s definition.

Tom Maxon, Head of US Operations at CoolBitX, a blockchain security company, welcomed the initiative saying that by defining tokens and coins, the CRC will not only help regulators to more acutely define the nature of certain digital assets, it will also help companies within the space to understand themselves and their product offerings.

Noting the previous joint public-private efforts to develop strong frameworks for the biotech industry in the 80s and the internet during the 90s in the U.S., Maxon added:

“The same could happen to crypto if the CRC taxonomy is able to resonate with regulators. Perhaps we will see a future where stable coins are regulated under Treasury, bitcoin as retail-driven digital gold under the FTC, security tokens under the SEC, and custody with FINRA.

“Still much work must be done; the industry needs to move past intense, polarizing infighting, and government agencies need to take this technology seriously. But it all begins in the industry and regulators buying into a standard taxonomy. Maybe in the near future, the term “crypto” will not be used as a catchall term for all digital assets. Instead this technology could seamlessly naturalize itself into the fabric of everyday economics, finance, or currency.”

Industry experts are particularly appreciative of the initiative as the current lack of clarity around the methods used by entities such as Fincen or the SEC to classify tokens is frustrating for crypto firms, noted Fran Strajnar, CEO and Founder of Brave New Coin.

“It creates uncertainty around how individual token holdings may be taxed, the legal rights a token holder has against an issuing ‘foundation’, and the potential fines a token issuing foundation may receive for not adhering to SEC guidelines,” Strajnar added.

Potential Conflicts and the Need for Inclusivity and Objectivity

Carylyne Chan, Chief Strategy Officer of CoinMarketCap, said that while the CRC is a “great first step” toward simplifying the classification of crypto tokens, it must be viewed as “consistent with general industry views and observations” before the rating system can be fully adopted as an industry standard.

To that end, Chain said, “As it currently stands, the ratings of some of the cryptoassets seems to conflict with the stance of some of the Crypto Rating Council members themselves. It might be difficult for regulators to review any cryptoassets using this framework until the CRC ratings can prove that the methodology is robust and stands up to scrutiny.”

Noting that the council is made up of a narrow subsection host of the industry, Alex Lam, Co-Founder and CEO of RockX, said that there could be a number of challenges to the CRC’s long term success.

“In particular the potential conflict of economic interests between the exchanges involved, as well as the projects analysed, may raise the question of how, and for how long, can this institution achieve its objectives. In the longer term, the CRC will also need to incorporate a much broader array of industry actors to draw on the full gamut of knowledge within the cryptocurrency ecosystem. I hope to see the eventual panel being more inclusive and representative of the global digital assets market as a whole,” he said.

Strajnar also echoed similar views and said that it is currently unclear how the ratings agency is aligned with the likely more aggressive perspectives of regulators in agencies like the SEC. Although he appreciated the founding members’ market expertise and granular legal understanding of the position that digital tokens take under securities law, he said:

“…they [founding members] all likely benefit from most assets falling under the ‘not security’ classification.”

Strajnar called for ‘A best of all worlds’ approach where views from a wide range of stakeholders are reflected in ratings services, saying:

“It would be encouraging to see non-industry players such as international law firms, banks and traditional financial institutions join the ratings council. This would provide a more objective and grounded perspective on how regulators might challenge and approach the crypto asset space.”

Sky Guo, CEO and Co-Founder of enterprise blockchain platform Cypherium, said that even if these ratings may not carry much legal weight in the beginning, they will inform how the crypto community might meaningfully utilize a rating system.

“In other words, one of the major value propositions outside of "legitimizing" certain digital assets will be a classification system that helps users within the DLT ecosystem navigate our space. One might consider this rating system more akin to the ESRB than S&P Global, at least in the beginning. This would be to the great benefit of our community, certainly, as it would help individual enthusiasts, as well as institutional actors, focus their time and energy on projects that suit their needs,” he said.

However, Guo underscored a major risk saying that if the CRC accrues such influence as to affect price or utility of particular networks, beyond the control and consent of its users, then its utility would be undercut severely.

“Nevertheless, it is a risk worth taking, and should be taken by the most trusted players in the American crypto space,” he added.

Brian Brooks, Chief Legal Officer at Coinbase, took to Twitter to provide clarity on some misconceptions:

Council members do have an interest in increasing the number of assets they can list, custody, or invest in, but they also have a strong self-interest in avoiding fines and other penalties that could be imposed if we inappropriately listed unregistered securities on our platforms

The Council’s website is clear: we’re not providing legal advice and people should consult their own legal advisers. You can think of our efforts as the foundation for an automated compliance tool, of which there are many in the financial services world.