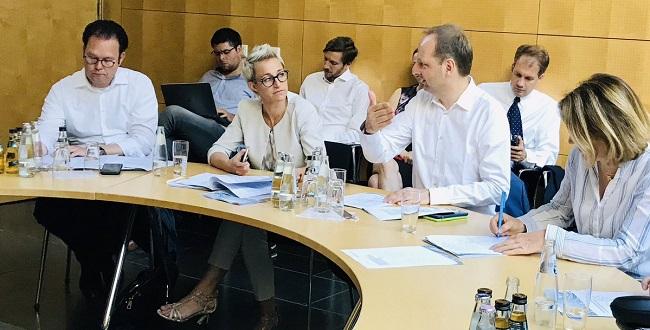 The Union of Christian Democratic Union of Germany (CDU) and Christian Social Union in Bavaria (CSU) is planning to incorporate blockchain technology into public services.

In an announcement, the CDU and CSU Union, which represents the center-right Christian democratic political alliance of Germany’s two parties, unveiled its plans to use blockchain in the domains of public and administrative tasks, registration and document protection, and electronic health records.

The Union also suggested the formation of a new company that should be connected to an alternative commercial register. The new system would have a digital, encrypted identification, done by specially trained notaries.

Notably, the Union’s plans go far beyond blockchain administrative services as parliamentary group leader Nadine Schön supports the development of cryptocurrency for the state, according to Cointelegraph Deutschland.

As per the report, the cryptocurrency could take the form of an e-euro as a stablecoin but conventionally be regulated by the central bank. These “should be spent via commercial bank crypto-tokens that handle them as demand deposits,” the report said citing the paper.

However, the European Central Bank (ECB) reportedly declined to comment, stating “it does not comment on individual party statements.”

Late last month, ECB official Vitas Vasiliaukas underscored the benefits of central bank digital currencies while warning to take caution. The ECB also earlier said that crypto-assets do not have any risks or threats to Europe’s economy. It formed an advisory committee to investigate the implications and risks of cryptocurrencies and crypto-assets in the areas of monetary policy, financial stability, and financial market infrastructures.