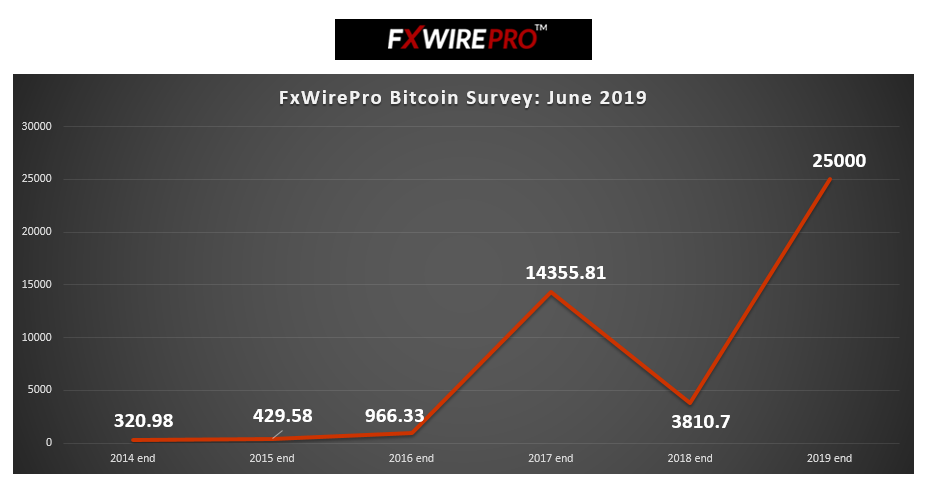 The battered bitcoin will hit a new record high by year-end against the U.S. dollar on higher real transaction growth and renewed optimism among market players, an FxWirePro survey showed.

After a year-long pain, the battered bitcoin, which lost about 80 percent last year, is once again on the path of rising. For the first time since July 2018, the bitcoin has broken through the $8,000 rate and gained over 100 percent this year. In May alone, the bitcoin surged over 50 percent and the majority of the crypto analysts believe that uptrend will continue.

According to the median forecast of 21 research organization and institutional investors surveyed between June 3 -10, the Bitcoin is forecast to hit a fresh high of $25,000 by end-2019. While 17 forecast it to surge to $10,000 or more level by December, only four forecasts the prices to rise to $50,000 or more. Only two predicted the BTC/USD to decline and hit as low as $3000.

“Bitcoin is finally taking an overdue breather after enjoying a stellar rally over the past few weeks. Last month's resiliency in the face of the hack at a major exchange has given the crypto asset a huge credibility boost, while reports of mainstream adoption haven't hurt the cause either,” noted LMAX Exchange in its June 7 report.

“Household names like Starbucks, Microsoft, TD Ameritrade and Whole Foods are all making moves in the space, while governments have been more receptive to working with the crypto asset.”

It is worth noting that Fran Strajnar, a blockchain evangelist, has come up with a very positive view wherein he forecasts Bitcoin to reach $200,000 by January next year. His estimate is based on the belief that the rate of adoption is directly proportional to the price increase; hence, the higher the adoption rate, the more is the increase in value.

In addition, Zhao Dong, one of the biggest Bitcoin OTC traders in China, has predicted BTC to reach $50,000 by 2021. He further said that this is the best time to invest in the cryptocurrency since there is even a chance of yielding 100 to 200 percent over the next 3 years.

“The market has enjoyed a nice run since breaking out above a consolidation between Q4 2018 and Q1 2019., though the rally has resulted in extended technical readings after racing through the July 2018 peak at 8,500. Next key resistance comes in at the 10k psychological barrier. Overall, look for additional upside to be limited for now, to allow for these technical readings to unwind from stretched readings, before the market considers a meaningful push beyond 10k. Setbacks should ideally be supported ahead of 6,000,” LMAX added.

Market bulls believe that the strong showing could be a signal of the Bitcoin being a worthy investment opportunity for the future. However, the digital currency’s volatile nature and risky nature has led to plenty of skepticism.

Meanwhile, Arthur Hayes, the CEO of crypto derivatives exchange BitMex, has come with a very bearish prediction. Changing his earlier prediction, where he stated that the BTC conceives a possibility of reaching $50K by end of this year, he now says that the crypto king will possibly reach a low of $3K and will continue the downtrend for throughout this year.