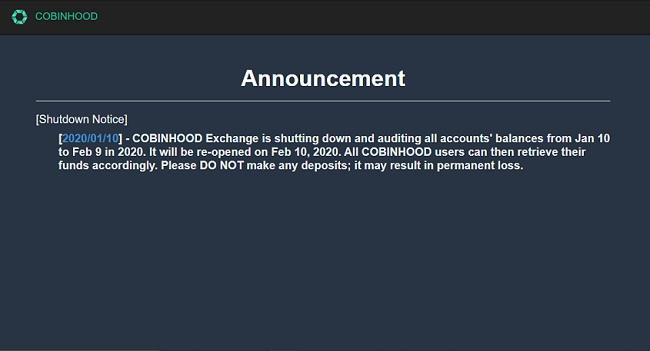 Cryptocurrency exchange Cobinhood has announced that it has shut down its operations.

In a shutdown notice posted on its website, the exchange said:

“COBINHOOD Exchange is shutting down and auditing all accounts' balances from Jan 10 to Feb 9 in 2020. It will be re-opened on Feb 10, 2020. All COBINHOOD users can then retrieve their funds accordingly. Please DO NOT make any deposits; it may result in permanent loss.”

However, the message is quite ambiguous and it is unclear if the exchange will resume its operations on February 10 or just allow withdrawal of funds.

CoinDesk reported that there were rumors in the past about Cobinhood going bankrupt or running off with customers’ funds in an exit scam. Founder Popo Chen offered clarification last May in an online post saying:

“I hereby declare: This is no exit scam. The company didn’t file bankruptcy either.”

He went on to explain as to what led to these rumors in the first place. Chen said that some misleading information had caused his ousting from the company, although briefly, in April 2019. The following month, Cobinhood had to announce its suspension to the authority and legally lay off all its employees.

“The mother company Blocktopia, Inc. then formed a smaller team to continue operations of DEXON Foundation and COBINHOOD Exchange. So far COBINHOOD Exchange and DEXON mainnet are both functional and not affected,” he added.

Later in July, Chen said that shareholders were negotiating the future plan of the company, adding that a final solution could be reached before the month’s end.

Back in 2017, Academy Award-winning actor Jamie Foxx had endorsed Cobinhood’s initial coin offering, in which the exchange raised nearly $10 million.