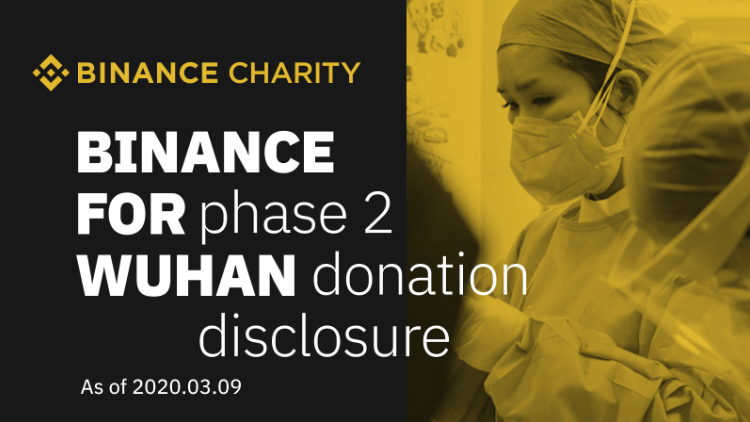 Binance Charity has concluded the second phase of its donation for Wuhan.

Crypto exchange Binance has been doing its part to help combat coronavirus through its organization, Binance Charity. The company gave an update about its “Binance for Wuhan” donation on its blog.

Binance Charity invested in oxygen machines after learning that they were a necessity at the hospitals because they help prolong the patients’ lives giving them more time for further treatment. One hundred machines were an independent donation and 288 were a match donation of the blockchain charity organization. A total of 44 hospitals received the machines.

“As these oxygen machines reach more hospitals, we believe more lives can be saved,” Binance wrote.

The organization sourced supplies all over the world and communicate with hospitals who needed the supplies. It also worked with custom clearance companies, so it was able to go through “Green Pass” at customs without tax charges. Binance Charity will continue to help despite the decrease in the number of newly infected cases and an increase in the number of cured patients.

“We have made progress in the battle against the virus, but the war is still not completely won, and we won’t stop until the crisis ends. Binance Charity will continue to support the fight till the end, and victory will be ours!” Binance announced.

Meanwhile, Binance Charity just welcomed Jarred Winn as its new Senior Vice President. Winn has over 10 years of experience in marketing and business development. He is also an expert in partnerships, marketing and growth strategy in the blockchain and fintech space.​