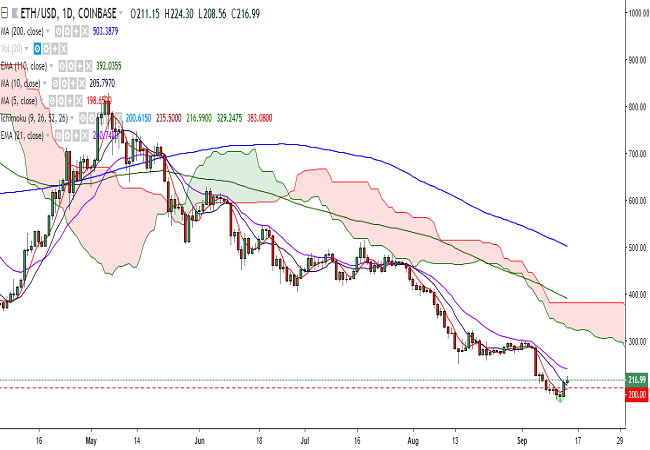 Crypto experts have been speculating that liquidation by ICO projects triggered the recent weakness in the value of ETH. According to the data from TrustNodes, ICO projects sold nearly 160,000 ETH in the past 10 days itself.

This month, the largest sell-off so far was seen on September 4 when around 82,000 ETH was sold which was followed by a huge decline in Ethereum price.

“Of course this data is not completely accurate. It is based on the movement of eth from addresses known to belong to ICOs,” TrustNodes clarified.

Referring to recent clarification from Santiment, TrustNodes pointed out that the biggest sell-off so far came from Digix, adding that the project’s eth holdings had a paper value of around $150 million, which is much higher than the market cap of DigixDAO. The market cap of DigixDAO is around $69.7 million at the time of writing (according to data from CoinMarketCap).

Ethereum price fell 61 percent since August 2018 to hit the 13-month low of $167 on September 12. The pair has recovered slightly and reclaimed the $200 handle. It is currently trading in the green at $217 at the time of writing (Coinbase).