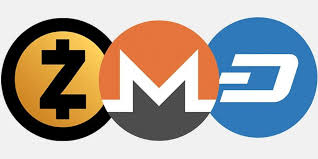 Privacy coins are the cryptocurrencies which are fully anonymous and untraceable. There are various privacy coins and the major ones include

Monero, which was previously known as Bitmonero, is the first coin to use CryptoNote technology. Cryptonote is a next-generation platform useful for creating anonymous and secure cryptocurrencies.

It is an open-source technology and concept for the cryptocurrencies of the future. The main features are

Ring signature is a type of digital signature that can be performed by any member of a group of users that each have keys. A ring signature is composed of the actual signer who is then combined with non-signers to form a ring and it helps to mask the origin of the transaction. All members are considered equal and valid in this ring.

Stealth address is a technology used for protecting the privacy of the receivers of cryptocurrencies. It requires the sender to create a random one time address for the given transaction so that different payments made to the same payee are unlinkable.

RingCT: It is nothing but Ring Confidential Transaction (CT) used in Monero to improve transaction privacy by hiding the transaction amount sent.

Monero is fungible as every transaction is private by default. Monero hides the sender, recipient address and transaction amount.

In Monero, transactions are confirmed by distributed consensus and immutably recorded on the blockchain. Third parties do not need to be trusted to keep Monero safe (no trusted setup).

On an average, Monero blocks are mined every 2 minutes and its transaction confirmation time takes about 20-30 min on an average. Monero has implemented a dynamic size limit and it gets changed by itself. It doesn't have hard-coded maximum block size and so penalty fee is charged for large transactions.

Monero’s transaction cost was very higher earlier but after successful execution of hard fork “Monero 0.13.0 Beryillum Bullet” average transactions cost have been reduced from 60 cents to 2 cents after. Bulletproofs are a big deal it can increase the privacy of digital currency transactions and it also decrease their size.

Unique features of Zcash are

Zero-knowledge proof is a method or process where one person (the prover) can prove to another party (the verifier) that something is true without revealing any information apart from the fact that this specific statement is true.

There are four types of transactions in the Zcash network

New blocks are created roughly every 150 seconds and maximum block size 2 MB. The average time needed to create a private transaction is 60 sec. Zcash Transaction per second is 27 and the transaction cost is $0.001.

Zcoin is an anonymity and privacy-oriented cryptocurrency which uses Zero-knowledge proofs via Zerocoin protocol.

It is a method by which one party (prover) can send and receive coins without disclosing which specific coin belongs to them. The term Zero knowledge proof means that no information about the secret is revealed, but the second party called as Verifier is convinced that first party called as prover knows the secret.

Zerocoin works by allowing you to burn coins (otherwise known as Zerocoin mint) and later redeem an equivalent number of brand new coins (known as Zerocoin spend). It provides larger anonymity compared with other privacy cryptos. These new Zerocoins have no transaction history and with a lot of users minting coins at the same time, it becomes impossible to trace the newly minted coins to a particular user.

To mint a Zerocoin, a person generates random serial number S and encrypts this into a coin C by use of second random number R. These two numbers are used in cryptographic function to generate value “V”. The value V is posted to the blockchain to prevent it from being changed in the future.

Zcoin has high block time 10 min and maximum block size is 2MB. The average time needed to create private transaction is 2-3 sec. Zcoin Transaction per second is 14 and the transaction cost is $0.13.

PIVX is a privacy-focused cryptocurrency based on a fork of DASH v0.12.0x core with Proof of Stake consensus mechanism with a focus to improve some of the issues of Bitcoin like scalability and practicality.

PIVX has high block time of 1 min and maximum block size is 1MB. The average time needed to create private transaction is 2-3 sec. Transaction per second is 70 and the transaction cost is $0.003. 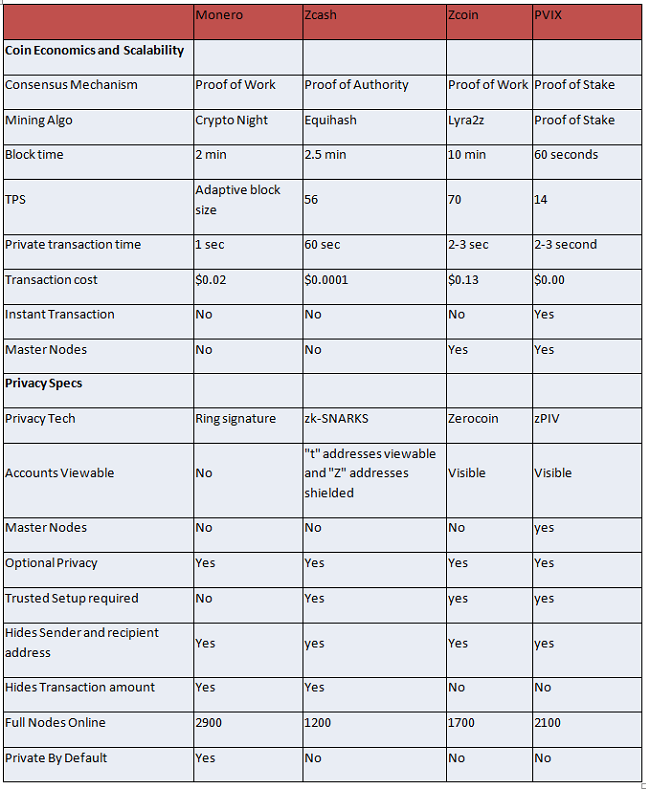 Monero is highly rated privacy currency -- it is only currency that is untraceable, untrackable and unlinkable. The only problem with Monero is centralization of miners and lack of adoption.

PIVX is fast and has less transaction fees. It is the early adopter which uses Proof of Stake consensus mechanism. It can privately send coins without being traced using Zerocoin Protocol (ZPIV). It uses “SwiftTX” to create instant transactions. But the only drawback is that it will not able to hide transaction amount. But it is very much undervalued

Monero was trading lower following the footsteps of Bitcoin and lost more than 50% in this month. The pair has hit a low of $38.80 and is currently trading around $41.50.

In the daily chart, RSI is around 17 nearing over the sold zone and is showing bullish divergence. So there is a chance of pair is expecting to show a bounce back till $73.

On the lower side, near-term support is around $38 and any violation below targets $30/$16.

On the lower side, major support is around $49 and any break below confirms bearish continuation. A dip till $40/$30 is possible.

On the lower side, support is around $0.4700 and break below that level confirms bearish continuation and a dip till $0.34 likely.

[Correction: The article has been edited to mention that Monero's transaction cost has reduced to 2 cents after successful hardfork. The table has also been updated accordingly.]