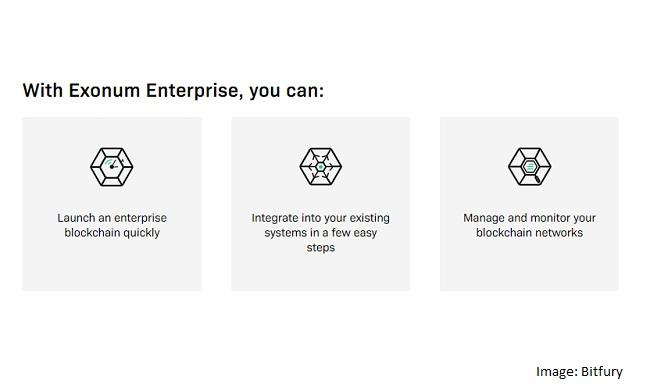 Crypto mining firm Bitfury has announced the launch of Exonum Enterprise, which is basically the expansion of its blockchain framework Exonum into a full-service offering.

Founded in 2011, Bitfury is a leading security and infrastructure provider for the bitcoin blockchain. In November 2018, the bitcoin mining giant closed an $80 million private placement led by Korelya Capital and joined by Galaxy Digital, Macquarie Capital, Armat Group and other investors. It is also a member of the Hyperledger blockchain project.

In July 2017, the company launched Exonum, its open-source enterprise-grade blockchain framework that helps businesses and governments to bring their blockchain ideas to fruition.

Gleb Palienko, head of Exonum, said that the team has been testing, expanding and improving our Exonum blockchain platform since 2017.

“It is now one of the most secure and efficient blockchain platforms available today for enterprise-scale projects, and its effectiveness has been proven through several global projects,” he said. “The Exonum Enterprise platform will further the adoption of blockchain, helping make our institutions more trusted and in turn improving the lives of people all around the world.”

As per the details, Exonum Enterprise introduces a number of new features including a full-service dashboard that tracks blockchain deployments, Bitfury DevOps support, and the ability to launch blockchain projects in as little as five minutes. Bitfury claims that the platform can handle up to 5,000 transactions per second.

Bitfury has made a number of major announcements this year including a music entertainment division, Bitfury Surround; a blockchain-based consent management system; an artificial intelligence division; and others. The company has been recognized as a Technology Pioneer of 2019 by the World Economic Forum.